In a special weekend edition of the WEEKLY GOODS, here’s a running review of AEW’s “All Out” PPV.

It’s likely to be a four-hour event, so let’s get right to it. 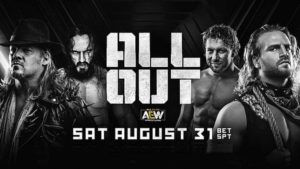 Luchasaurus’ senton out over the top rope is impressive.

In a match involving a team that features a very large man in a dinosaur luchador mask, what is most likely a child and a guy called Jungle Boy, the So-Cal Uncensored gimmick is the stupidest thing in this match. They just seem like a group of dads going through a mid-life crisis who all go to the club on a Saturday night, all dressing similarly, acting like they can still fit in.

All that being said, whoever’s under the Luchasaurus mask is impressive, and if the whole Jurassic Express angle eventually gets him over I’m in for it.

Oh, we have a 30-minute time limit in this one. Watch out for that!!

Omega with the Kurt Angle finger pyro during his entrance.

So Pac keeps being referred to as “The Bastard” without any clear reason why? Does his gimmick involve an unknown parentage? Is he just a “rude guy”? I have no effing idea because the don’t elaborate on it. What I do know is that Pac’s abs don’t look nearly as good as Adrian Neville’s, but it also seems that AEW’s Pac isn’t hindered by WWE’s Wellness Policy like Neville was (dude is SWOLE).

Intense, well-worked match. The strong-style looked rough at times, with some brutal-and-beautiful duplex-pinning combinations and hard dropkicks, and the stiff chops that Pac took bruised his chest real bad. I can’t imagine this match would’ve been nearly as good had Jon Moxley been in it. But this went way took long. They had such a high workrate that by the 20-minute mark they were so gassed they botched a couple combos and the ending was incredibly bad. Omega was put to sleep even though he’s clearly awake and looking around? Disappointing end to a really good match,

So Darby Alin comes out first, but the on-screen chyron says “Jimmy Havoc.”

Janela at one point grabs a tennis rack from under the ring and mocks it, with Goldenboy or Excalibur (I honestly can’t tell the difference between their voices), saying “who would ever think of using that??” Wow. good dig at Jim Cornette. Inspiring…

So Jimmy Havoc wins this thing by smashing Janela through one of those Cracker Barrels with a clothesline. Janela had a really cool Canadian Destroyer over the top rope to drive Alin through a table. Oh, JR was also allowed to say “shit” on the broadcast.

The Dark Order Vs. Best Friends

So the stipulation attached to this match is “winner gets a first-round bye in the AEW Tag Team Tournament.” Why so convoluted? So these teams are wrestling a match before the tournament begins, so they don’t have to wrestle in the first round of the tournament… so doesn’t this essentially make this a first round match?

Anyway, Stu Grayson looks ready for Burning Man with his nice purple scarves tied around his waist and arm and inspiring face paint, so I’m sure he’ll be eager to get this over with quickly.

Like how Trent is just “Trent.” He’s got a good look and can work; looking forward to his singles win.

The Dark Order wins, and Stu Grayson is stoked! His gotta catch his favourite DJ’s set right away.

Orange Cassidy appears! I like this guy, he’s the post-modern play of wrestling. Very creative gimmick and entertaining.

So Riho, the waif of a human, who’s also a live-action video game character, wins this match. This is to set up a David Vs. Goliath sort of match for the Women’s Championship. Which just isn’t believable; I thought AEW was supposed to be about workrate and legitimacy.

I wasn’t a fan of the unprotected chair shot that ignited this feud, and I’m even less of a fan that they showed it ten times in the video package before the match. It’s just idiotic; with everything we know about head trauma and CTE, it’s just a cheap and uncreative way to build heat.

Regardless, it gives Spears the “Chairman of AEW” gimmick, which is a good mind-games sort of thing, so I don’t mind it.

It’s a really well-paced, and well-worked match. Tully Blanchard, MJF, and Arn Anderson get involved, but it isn’t overly-booked and works well into the finish with Cody going over.

The Young Bucks Vs. The Lucha Bros.

Oh, great. The Young Bucks. The good thing about The Bucks is that you know exactly what you’re getting when you sit through one of their matches, and that’s a 20 minute over-suffed spotfest a dumb amount of Superkicks because they’re hilarious. Luckily, a ladder match is conducive to mostly high spots, so it won’t be quite so painful.

Oh god. Nick Jackson catches the top rope on his way getting pushed off the ladder and takes an ugly bump through one of the two tables set up by the ramp.

Great match, with maybe a couple too many high spots stuffed in at times when it makes more sense in-ring for a team to go for the belts, but expecting The Young Bucks to care more about in-ring storytelling over hitting a high spot only leads to disappointment. Love that the Lucha Bros. went over.

So during the pre-match package, we hear Bret Hart describe the AEW World Championship as “one of the most beautiful belts you’ll see around,” and I have to respectfully disagree with The Hitman. It is not a beatiful belt. It isn’t ugly, but it looks like one of the fifty boxing title belts that exist, so if that’s what they’re going for and want that to be the aesthetic then sure, it’s “beautiful.”

The match is good. So high spots outside the ring, and Jericho gets colour, which actually gets pretty messy once they get back in the ring. The match is nowhere near the pace of Omega/Pac, and it hurts to say but Jericho is really starting to look a step behind in the ring, but all in all it’s paced well and is entertaining. The end felt a little weak (and perhaps rushed?) for an inaugural world title finish; I get that the “Judas Effect” is Jericho’s finisher, but a reverse elbow to Hangman’s head kills his title aspiration?

Anyway, Jericho leaves as the first AEW champion, and that feels like the right move. He’ll cut a good promo to open the live Wednesday show when it premieres.

So a pretty good show, but I can’t help but shake this feeling: it feels like TNA. Better workrate than TNA had, especially when they were just employing the annual released WWE superstars. But the crappy, generic entrance themes and awful entrance videos just made the production feel like a really good indie show. FWIW, I really liked TNA in it’s day; it’s where I first watched Samoa Joe and AJ Styles, and where I got to continue watching Kurt Angle’s career when he was still my favourite wrestler. But, it’s a step behind WWE. It’s great to have competition, but AEW will be competing with NXT, not Monday Night Raw.

Maybe their live show will be a pleasant surprise and truly re-ignite the Monday Night Wars. We shall see.

What did you think of All Out? Comment below!

Muzzin, Moore recalled from conditioning loans in the AHL